Isla Murciélago is located just off the North Pacific Coast of Costa Rica, in Guanacaste’s Santa Rosa National Park. This protected marine area is home to much of Guanacaste’s marine life, including many species of ray, an intersection of reef and open ocean fish, and the tortuga golfina (Olive Ridley sea turtles) that make their arribadas on Playa Nancite.

Santa Rosa National Park is also home to tiburones toros (bull sharks), and Isla Murciélago’s Big Scare is one of the sites in the country where they appear most frequently and consistently.

Big Scare is located on the tip of Isla Murciélago, right where the strong Pacific currents pass by the island. This intersection of strong open ocean currents and a sheltered reef is what leads to the presence of bull sharks in the area. The sharks stop in the area to patrol for food and make use of underwater “cleaning stations”, where blennies, wrasses, and other cleaner fish eat parasites and other debris off of sharks’ bodies and out of their mouths. 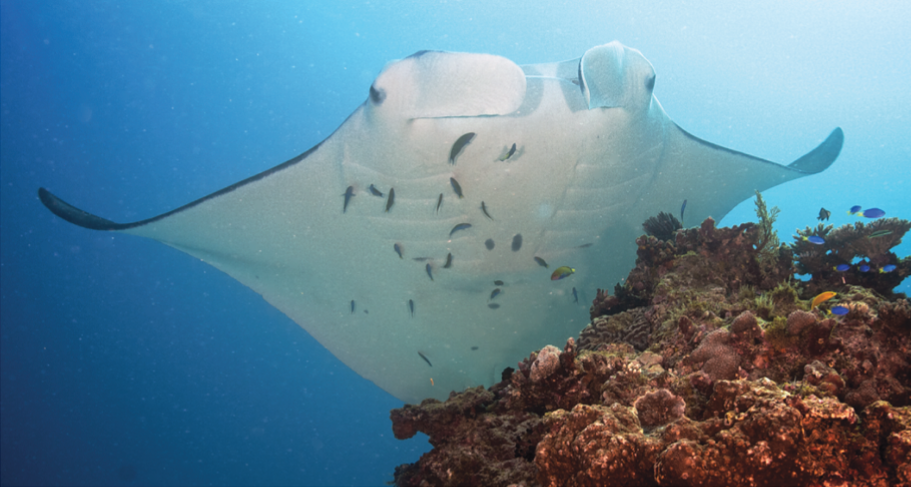 Dive boats heading out to Big Scare typically to depart from Playas del Coco, about a 45 minute drive away from Las Catalinas. From there, the trip to the dive site averages a little over an hour depending on water conditions through the Golfo de Papagayo and passes by famed surfing spots Witch’s Rock and Ollie’s Point on Playa Naranjo.

Due to the site’s depth (80 feet), the potential strong currents on the edge of the site, and the presence of bull sharks, Big Scare is considered an advanced dive location, requiring a PADI Advanced Open Water certification or a minimum number of dives. Divers drop in right above the site with a 60-70 ft drop straight down to the flat seafloor. Once in the site, there is a rock face to the north, cleaning station to the west, flats to the east, and a gradual slope down into the ocean to the south.

The best strategy to see bull sharks is for divers to stay as close as possible together. Bull sharks tend to circle objects of interest, including groups of divers. A tight group means these circles tighten as well, to the point where these up to 8ft, 300 pound sharks can be seen clearly.

This site is also frequented by Manta Rays, which make use of the cleaning stations and tend to be curious about the bubbles coming up from divers.

ConnectOcean runs chartered dives out to Isla Murciélago, a full day trip that includes one or two dives at Big Scare, a stop over in one of the sheltered coves in the area for lunch, and a number of other potential dive sites on the way back to add variety to the day depending on conditions.

Big Scare is the most reliable way to see these powerful, beautiful sharks in Costa Rica, and the site is only a day trip from town. Reach out to the concierge team to learn more about the trip and book your next dive.

In early July, motion-activated cameras were placed all across the 1000-acre tropical dry forest reserve at Las Catalinas, with the purpose of...
END_OF_DOCUMENT_TOKEN_TO_BE_REPLACED

Cvent announced today that Guanacaste has been ranked number 11 on Cvent’s annual list of the Top 25 Meeting Destinations in Caribbean and Latin...
END_OF_DOCUMENT_TOKEN_TO_BE_REPLACED

A Naturally Active Town: Sports and the Outdoors in Las Catalinas

The town of Las Catalinas is located in Guanacaste, Costa Rica, surrounded on one side by a tropical dry forest reserve and on the other by Playa...
END_OF_DOCUMENT_TOKEN_TO_BE_REPLACED