In early July, motion-activated cameras were placed all across the 1000-acre tropical dry forest reserve at Las Catalinas, with the purpose of tracking native Costa Rican animals that live in the area. This project is part of a partnership with Guanacaste Wildlife Monitoring (GWM), a local organization who supports the tracking and protection of native Costa Rican wildlife.

The initial phase of this program ran for three months, and featured 6 cameras placed around the nature reserve. These cameras stream the footage back, where each species can be identified and counted to further understand the local ecosystem. Ultimately, the goal of this project is to build a baseline database through which Las Catalinas can assess the success of conservation efforts over time.

Footage of More Than a Dozen Native Animals in Costa Rica

GWM compiled the footage of all unique animal sightings into short clips. Here is a compilation of some of the best sightings with helpful identifying information.

Over the course of the project, the team identified 52 species of mammals, birds, reptiles, and amphibians. The video above includes a handful from the first tracking period, including:

This presence of both quantity and quality bodes well for the ecosystem. The healthiest and most vibrant natural ecosystems have not only a quantity of animals, but also a diversity of species. Having many different species speaks to a wide variety of niches available to occupy, which is only possible in rich and biologically strong environments. For example, the world’s healthiest ecosystems can have thousands upon thousands of species of animal and plant life, each with complex interconnected relationships. These videos are capturing just the larger animals, but more footage will continue to reveal the health and complexity of this ecosystem.

Fascinating to know that many of the species that you can spot in Guanacaste national parks can also be found during a simple trip out onto the trails. That concept and experience is something that the town is dedicated to protecting.

A core belief that has helped shaped Las Catalinas development is that towns are best when they coexist in harmony with nature, which is why from the beginning the commitment was made that 1000 out of the 1200 acres in Las Catalinas would remain undeveloped.

But not untouched. In the early years, the tropical dry forest that made up Las Catalinas was spare and struggling. Much of the 1200 acres had been used as pasture land, breaking up the natural tropical dry forest habitat of this region. There were other problems too: unprotected from forest fires and under constant threat of rampant poaching, the ecosystem here was in a weakened state.

The creation of the Agroforestales team shortly after the founding of Las Catalinas was the first step in rejuvenating the forest. Their presence and patrolling of the area immediately began to deter poachers, especially as they began to replant trees and put into place their first major project: the single track hiking and mountain biking trails. 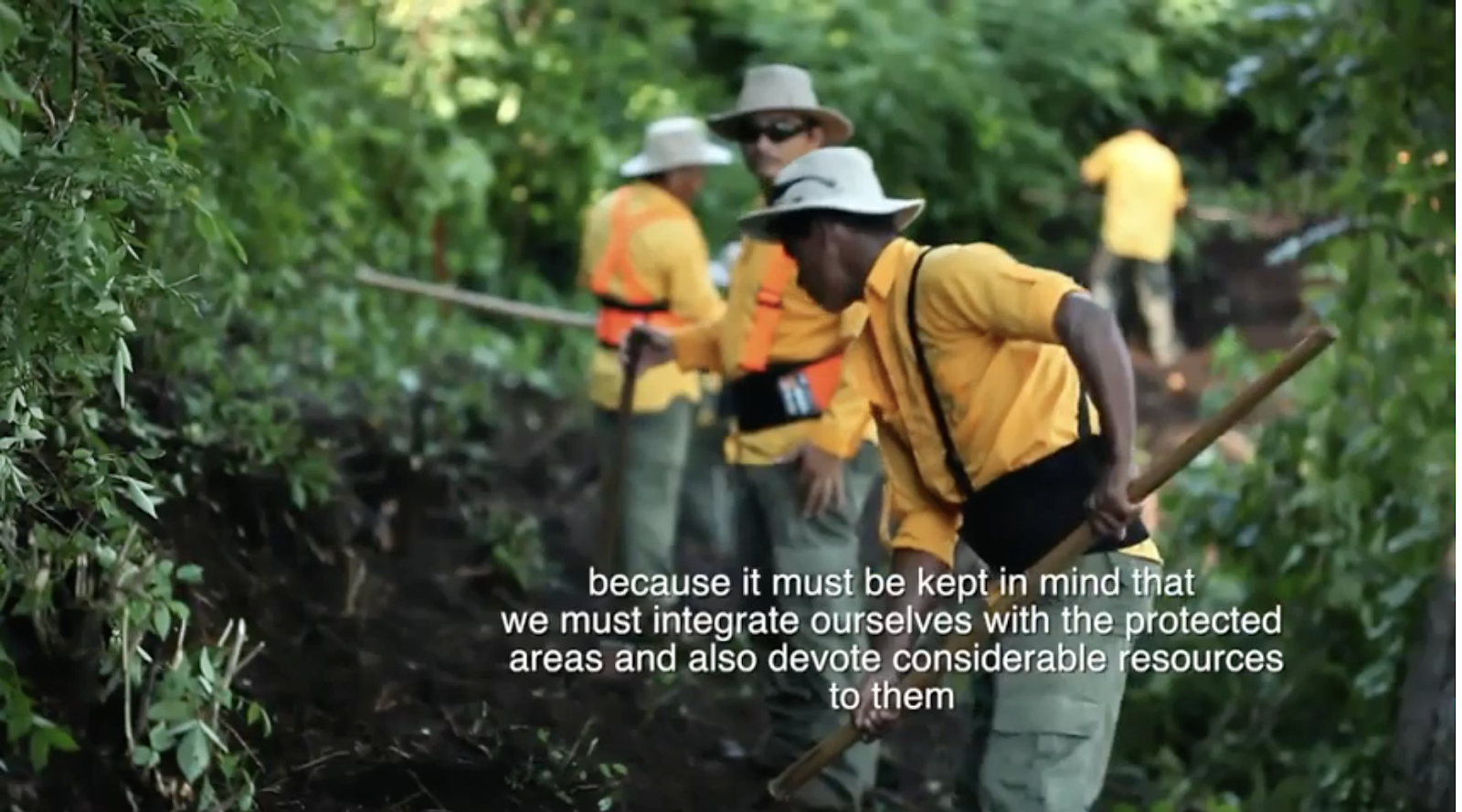 It seems counterintuitive at first that any development through a forest would be productive to conservation efforts, but the multi-use trails in Las Catalinas are actually very valuable in preventing forest fires.

Unlike some areas around the world where forest fires clear away dead brush as part of a natural cycle, fire is not an intrinsic part of the Guanacaste ecosystem. In our immediate area fires can be set for many reasons -- by hunters to trap animals, by farmers to clear pasture land or stray brush, or by accident, often resulting from sparks blowing from yard waste fires.

Built sustainably using local materials and responsive to topography, these multi-use trails offer a natural braking mechanism on the spread of forest fires, and double as a quick access route for the Incendios Forestales team to fight these wildfires. It has worked, and there has not been a single uncontrolled fire on property in the town’s history.

These trails also help combat run-off and erosion from the wind and rain, acting as both drainage system and natural form of structure that supports the forest. The management of these elements is another prominent challenge on the coast of Guanacaste, and in the years after founding thousands of trees have been planted on hillsides and around prominent watersheds, providing structure to the mountain and naturally conserving water.

Over time, the efforts in managing forest fires, helping put a stop to the rampant poaching, carefully reshaping the structure and draining of the forest with the trails, and replanting trees has allowed this ecosystem to thrive.

Over the next 10 years, the Las Catalinas nature reserve began to flourish thanks to the work of the many stakeholders of town. Each has played a vital part in ensuring that the developed portions of Las Catalinas work in harmony with the protected natural areas.

The way town is constructed has taken into account the natural world. There’s careful thought put into the overall planning of town, promoting high density over a small footprint to reduce environmental impact, create less impervious surfaces, require less infrastructure, and help to preserve a greater amount of green and recreational areas.

Specific features like stone watering holes in the ravines of Las Catalinas provide year-round drinking water for animals. Parts of town like the Monkey Corridor between forest and beachfront as well as the bridges over the protected mangrove just north of Playa Danta are results of conservation blending with development to create better ecosystems and a more interesting town. 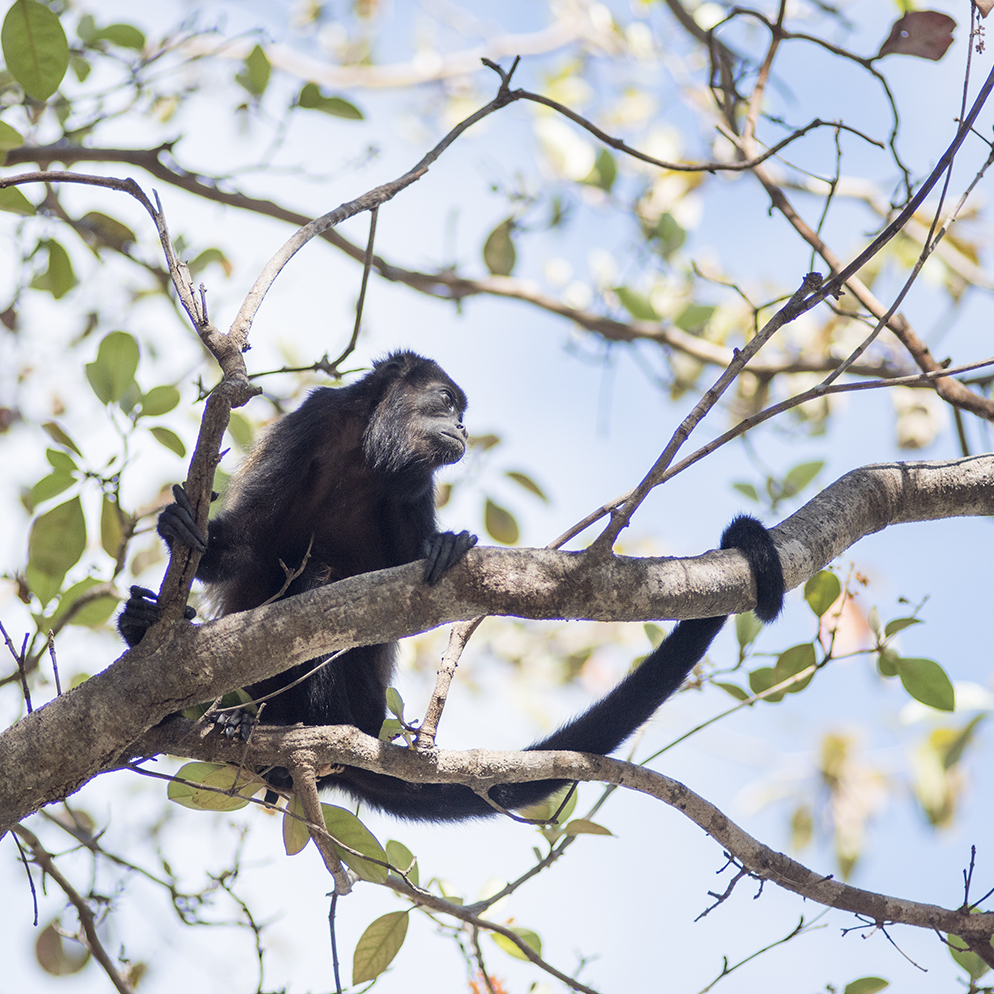 You only need to take a walk along the beachfront to see it, where monkeys, iguanas, and birds all intermingle with the rhythms of daily life. However, it’s out in the reserve where these efforts are most prevalent. The landscape is richer and more full of vegetation thanks to careful reforesting efforts. A trip along the trails can bring sights of dozens of different species of plants and animals, the sign of a thriving ecosystem. And of course, off the trails where the cameras are watching, it’s now possible to see the larger mammals and birds that have begun to inhabit the area once more.

What Lays Ahead for Conservation at Las Catalinas

The head of conservation at Las Catalinas is Michael Garcia, a Costa Rican forest advocate and trail designer who has spent more than 20 years working in ecotourism operation, community outreach and wildlife conservation enforcement and promotion. When asked about the efforts to this point, he responded:

“Since the founding of Las Catalinas in 2006, there has been a concentrated effort to revitalize these 1000 acres and protect them in perpetuity as a wildlife reserve. Seeing those efforts come to life in vivid color is exciting, especially after years of work, and it marks another milestone in nature conservation for us and all of Costa Rica.”

In many ways, the documentation of animals in this area can seem like the culmination of work, but there’s still much to do. Continuing to protect the reserve from fires and hunting is a challenging project that requires constant vigilance, town continues to strive towards a more sustainable and harmonious existence with nature as it grows, and even this video documentation is just the test phase of a potentially much larger project to document wildlife here.

One of the goals for Las Catalinas is to become a worldwide example of a regenerated tropical dry forest, as well as a model for eco-intelligent development, and these initial efforts show promise. By combining a walkable, thoughtfully constructed town with dedicated protection plans, it’s possible to open this ecosystem and many others to people around the world to visit easily, and come together with nature.

Building a connection to the natural world and developing tangible and repeatable ways to protect it is a step towards a more interesting and more sustainable way of living. We’re proud to be a part of a town that is taking care to grow in a sustainable way, and look forward to seeing the ways in which Las Catalinas continues to grow and evolve in harmony with nature.

Cvent announced today that Guanacaste has been ranked number 11 on Cvent’s annual list of the Top 25 Meeting Destinations in Caribbean and Latin...
END_OF_DOCUMENT_TOKEN_TO_BE_REPLACED

Meditation can take many forms. Some of the most informal practices include breath work or finding a meditative state during physical activity like...
END_OF_DOCUMENT_TOKEN_TO_BE_REPLACED

The Most Common Costa Rican Birds in Las Catalinas

Las Catalinas is home to many species of Costa Rican birds, which include the pericos (parakeets) that make their homes here in dry season, the ...
END_OF_DOCUMENT_TOKEN_TO_BE_REPLACED