Las Catalinas: A Town In Harmony with Nature

A core belief that has helped shaped the town of Las Catalinas in Costa Rica is that towns are best visited, enjoyed, and lived in when they coexist in harmony with nature.

Las Catalinas’ style of urban development is inherently better for both nature and the human condition and intrinsically attracts a community of people who desire a more sustainable, healthier, more fulfilling and fun way of life; a town that Santarena Hotel proudly belongs to.

From the beginning, Las Catalinas committed to keeping 1,000 out of its 1,200 acres reserve undeveloped by placing the land into an untouchable trust and dedicating it as a tropical dry forest preserve.

In the early years, the tropical dry forest that made up Las Catalinas was spare and struggling. Much of the 1,200 acres was used as pasture land, breaking up the natural habitat of this region.

There were other problems as well, including a lack of protection against forest fires and the constant threat of rampant poaching. The ecosystem here was very much weakened when Las Catalinas was founded. 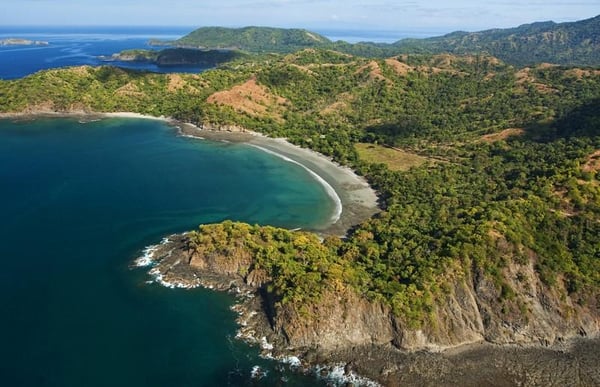 The creation of the Agroforestales team shortly after the founding of Las Catalinas was the first step in rejuvenating the forest. Their presence and patrolling of the area immediately began to deter poachers, especially as they began to replant trees and put into place their first major project: the single-track hiking and mountain biking trails.

Rejuvenating The Forest One Trail At A Time

It seems counterintuitive at first that any development through a forest would be productive to conservation efforts, but the multi-use trails in Las Catalinas are actually very valuable rejuvenating the forest and preventing forest fires.

Unlike some areas around the world where forest fires clear away dead brush as part of a natural cycle, fire is not an intrinsic part of the Guanacaste ecosystem. In the immediate area, forest fires can begin for many reasons: by hunters to trap animals, by farmers to clear pasture land or stray brush, or accidentally, often resulting from sparks blowing from yard waste fires.

By building sustainable, using local materials and responding to topography, these multi-use trails offer a natural mechanism to break forest fires and act as a quick access route for the Incendios Forestales team to fight these wildfires. It has worked, and there has not been a single uncontrolled fire on property in the town's history.

The trails also help combat run-off and erosion from the wind and rain, acting as both drainage system and natural form of structure that supports the forest.

Managing these elements is another key challenge on the coast of Guanacaste. In the years after founding thousands of trees have been planted on hillsides and around prominent watersheds, providing structure to the mountain and naturally conserving water.

Over time, the efforts in managing forest fires, helping reduce poaching, carefully reshaping the structure and drainage of the forest with the trails, and replanting trees have allowed this ecosystem to thrive.

In the past 10 years, the Las Catalinas nature reserve has reflourished thanks to the work of the many stakeholders of town. Each has played a vital part in ensuring that the developed portions of Las Catalinas work harmonizing with the protected natural areas.

The head of conservation at Las Catalinas is Michael Garcia, a Costa Rica forest advocate and trail designer who has spent more than 20 years working in ecotourism operation, community outreach and wildlife conservation enforcement and promotion.

When asked about the efforts to this point, he said: “Since the founding of Las Catalinas in 2006, there has been a concentrated effort to revitalize these 1,000 acres and protect them in perpetuity as a wildlife reserve. Seeing those efforts come to life in vivid color is exciting, especially after years of work, and it marks another milestone in nature conservation for us and all of Costa Rica.”

Conservation efforts include features like stone watering holes in the ravines of Las Catalinas which provide year-round drinking water for animals. Parts of town like the Monkey Corridor between forest and beachfront, as well as the bridges over the protected mangrove just north of Playa Danta are results of conservation blending with development.

You only need to take a walk along the beachfront to see it, where monkeys, iguanas, and birds all intermingle with the rhythms of daily life. However, it’s out in the reserve where these efforts are most prevalent.

The landscape is richer and more full with vegetation thanks to careful reforestation efforts, and larger mammals and birds have begun to reinhabit the area. In a recent project with partners at the Guanacaste Wildlife Fund, motion-sensitive cameras were placed throughout the reserve to catch some of these species on film and identify them. Each sighting was then tracked  and catalogued, with the highlights of this first round of monitoring compiled below.

A Town Surrounded by Nature

From day one, the way Las Catalinas has been planned and constructed has taken into account the natural world.

Looking ahead, care for nature, preservation of the surrounding ecosystem, and efforts to protect and enhance it remains a core value of Las Catalinas, hopefully setting a precedent for future development within the new world tropics. 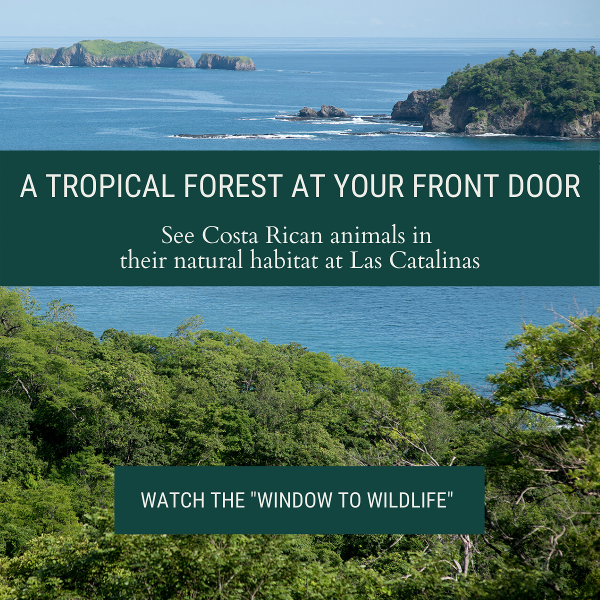 In early July, motion-activated cameras were placed all across the 1000-acre tropical dry forest reserve at Las Catalinas, with the purpose of...
END_OF_DOCUMENT_TOKEN_TO_BE_REPLACED

Cvent announced today that Guanacaste has been ranked number 11 on Cvent’s annual list of the Top 25 Meeting Destinations in Caribbean and Latin...
END_OF_DOCUMENT_TOKEN_TO_BE_REPLACED

Meditation can take many forms. Some of the most informal practices include breath work or finding a meditative state during physical activity like...
END_OF_DOCUMENT_TOKEN_TO_BE_REPLACED